This pensioner has fulfilled her lifelong dream of becoming a mother.

Seventy-year-old Jivunben Rabari from western Gujarat state in India revealed that she recently gave birth to a healthy baby boy, Lalo, who was conceived via IVF.

This is Jivunben and her husband Maldhari’s (55) first baby. The couple have been married for 45 years and lost hope for decades that they’d ever have kids.

Although the new mom doesn’t have an identification document to prove her age, she claims she is 70 years old, making her one of the oldest first-time mothers in the world. The couple’s doctor, Naresh Bhanushali, says the pair were adamant that they wanted a baby via IVF, even though they were warned about the risks.

“They came to me a year ago. Initially, we were reluctant to do this because of the woman’s age. But they were anxious to have a child, so we decided to go ahead,” says Dr Bhanushali.

“This case is the rarest of rare. It is a miracle to see a woman giving birth without any complication.”

Before doing IVF, Dr Bhanushali says they had to ensure that her uterus was wide enough to carry a baby.

“We had to do a surgical procedure on the woman before we started the process for IVF.

“We first made her menstrual cycle regular by prescribing oral medicines. Then we widened her uterus which had shrunk due to menopause. We fertilised her eggs, created a blastocyst and transferred it to the uterus. “We were a bit wary but Jivunben kept us motivated. She’s a very positive woman,” said the gynaecologist.

After two weeks of IVF, the doctor performed a sonograph and saw a fetus developing in the pensioner’s tummy.

“Luckily, she conceived at the first attempt,” the doctor said.

They later discovered that the baby had no deformities and allowed the pregnancy to go on for eight months before conducting a Caesarean section on Jivunben last month.

“Her blood pressure was high, and we had to deliver the child via C-section in the eighth month of the gestation period.

“We had a team of doctors including a cardiologist and a physician on standby … anything could have gone wrong because of her age.

“The couple are happy now and the mother is relaxed as well,” said Dr Bhanushali. “The baby is healthy, and we are continuously following the case.” 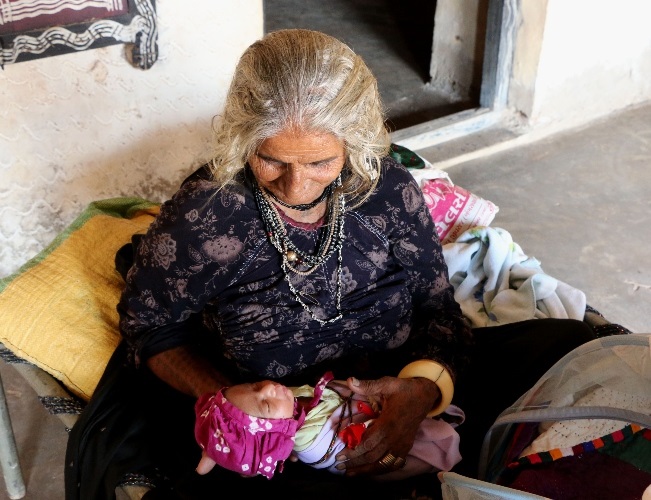 Both Jivunben and Lalo are healthy and back home. (PHOTO: Gallo Images/Getty Images)

Jivunben is not the first elderly woman from India to give birth. In 2019, then 74-year-old Mangayamma Yaramati from southern Andhra Pradesh gave birth to healthy twin girls after undergoing IVF treatment using a donor’s eggs and her husband, Raja Rao’s (80) sperm.

Leading IVF doctor Kamini Patel advised that IVF is not suitable for women older than 52.

“There are no rules and regulations yet but there should not be IVF treatment beyond 52 years of age. If a woman is physically, mentally and medically fit … the chances of getting pregnant is 50 per cent if the uterus is fine,” says Dr Patel.

“The doctors in this case must have carried out the treatment on moral and emotional grounds but it is not safe for a woman of that age.

“The really taxing part begins after the procedure because the pregnancy itself risks the heart and other organs as it is an extra burden on the body.”

Desolate puppy forever wore a Christmas sweater begging for a home, but time was running out

You may have missed

Desolate puppy forever wore a Christmas sweater begging for a home, but time was running out

This Cat Was Raised As A Husky And Now Considers Herself A Big And Brave Dog!